Who owns the Montreal–Saint-Hubert Airport?

The non-profit organization, Développement aéroport Saint-Hubert–Longueuil (DASH-L) owns the airport entirely and exclusively. It was transferred to this organization by Transport Canada (TC) on September 1, 2004.

Who manages the Montreal–Saint-Hubert Airport?

DASH-L and its employees manage the airport.

What are the airport’s opening and closing hours?

Like all airports in Canada, the airport is open 24 hours a day, 365 days a year.

What services are available at the airport?

How many runways does the airport have?

The airport has six runways.

How are the airport’s runways designated?

How are the airport runways used?

For physical (and safety) reasons, aircraft take off and land into the wind. The air traffic control unit, such as NAV CANADA in the control tower, determines the active runway, depending on the wind or circumstances.

What determines runway use?

The main factor is the wind. Aircraft take off and land into the wind. We invite you to consult pages 5 to 7 of our Soundscape Policy document on our website:

What do YHU and CYHU stand for?

Both refer to the same airport in St-Hubert. YHU is the three-letter acronym assigned by the International Air Transport Association (IATA), and CYHU is the acronym of the International Civil Aviation Organization (ICAO), a United Nations agency based in Montreal.

What is an air movement?

An air movement is a take-off or a landing. A plane that takes off is a movement; one that lands is another movement. If the same plane takes off and later comes back to land, this counts as two air movements.

What is the average number of air movements per day at the airport?

The average varies according to many parameters. However, before COVID, the average was about 400 daily air movements.

Are there days when the airport is busier?

Yes, some days are busier depending on the season, weather or operational needs.

What is the difference between small, medium, large and very large aircraft?

From a physical point of view, the difference lies in the number of seats, power, number and type of engines. From the aviation activity regulation point of view, there is no difference apart from the type of operation in progress (aerial work, taxi, charter, scheduled transport, training, etc.).

What types of aircraft can the airport currently handle?

The airport can accommodate aircraft with a wingspan of up to 36m that can carry about 200 passengers.

According to the World Health Organisation, noise is any sound or set of sounds considered undesirable; unwanted sounds, those that are disturbing, or sounds whose intensity is likely to cause adverse health effects. Thus, sounds that are unpleasant, discordant or interfere with the reception of a desired sound become noise.

Why was the airport built in the middle of a city?

The city developed around the Saint-Hubert airport, the first civilian airport established in Canada in 1927.

What causes aircraft noise, and are there differences in noise according to aircraft type?

Aircraft have two main sources of noise: engine noise and aerodynamic noise. The first is generated by the combustion of the engine, whether it is a turbine or piston engine. Where smaller aircraft are concerned, this noise can be minimized by adding silencers, as was done on training aircraft in 2016 at the Saint-Hubert Airport.

Both small and large aircraft also generate aerodynamic noise, which consists mainly of the noise of the propellers and turbines. Also, in the case of larger aircraft, the air comes into contact with a larger surface of the aircraft during take-off stages to create lift or slow the aircraft down with resistance on landing (flap extension).

How is noise perceived and measured?

Environmental noise is measured with a sound level meter and reported on a logarithmic scale, usually in A-weighted decibels (dBA). On this scale, 0 dBA is the threshold of human hearing, while 120 dBA is the threshold of pain. The human ear can detect sound changes of 3 dBA and an increase of 5-10 dBA is generally perceived as a noise twice as loud.

Why do planes make more noise in summer?

Here, it would be more appropriate to talk about the perception of noise because the temperature, time of day, winds or air density – especially when windows are open or people are outside – give a different impression of aircraft noise.

How is noise measured near the airport?

When necessary, it is measured by specialized firms that use the latest technology. There are no constant measurements like at Montreal—Trudeau Airport.

What types of aircraft use the Montréal—Saint-Hubert Airport?

There are training aircraft, multi-engine aircraft, private jets of all sizes, medical evacuation aircraft and a few other airliners such as 737-800s and Airbus 319s or 220s. There are also Sûreté du Québec, Air Médic and Armed Forces helicopters. There is no helicopter training school at YHU.

Are planes that take off louder than those that land?

In general, it would seem so, as engines are at full power at take-off whereas during landing they may be working at lower power, depending on the type of flight or aircraft.

Is it possible to take off or land at the airport at night?

It is always possible. Saint-Hubert airport has all the regulatory clearances for night flights, like many airports in Canada. However, there may be some restrictions, such as those related to training (touch-and-go maneuvers).

Are there any regulations regarding aircraft maintenance?

Yes, absolutely. And all the regulations are strictly followed and set out in the Canadian Aviation Regulations (CARs) documents; Canada is recognized worldwide for its safety standards.

What are the roles, mandates and responsibilities of the Soundscape Advisory Committee (SAC)?

The SAC was established in 2015; its mission is to “promote the exchange of information and provide a forum for discussion and consultation on all matters relating to the soundscape, and in particular, on acoustic criteria and noise mitigation procedures to improve the soundscape at the Airport.”

Who appoints the members of the Soundscape Advisory Committee?

They are appointed by DASH-L. As of 2022, the SAC has at least three members representing citizens from neighbouring municipalities.

Which entity regulates the activities of the Montreal—St-Hubert Airport?

As is the case for all Canadian airports, Transport Canada (TC) regulates the airport’s activities. DASH-L and airport operators may apply certain business decisions as long as these decisions do not contravene or interfere with federal government’s purview.

Why are there so many planes flying over Longueuil’s residential areas?

For safety reasons, aircraft (pilots) are not free to fly anywhere they wish and must follow specific routes to and from the airport to avoid conflicts.

Who determines and regulates air corridors?

Air corridors are preferential routes used for safety purposes. These routes are decided by air traffic control (NAV CANADA) and TC and are reviewed regularly by users (Soundscape Advisory Committee).

What are DASH-L’s mandates, roles and responsibilities?

Who appoints the members of the DASH-L Board?

The members of the Board of Directors are appointed by the:

What distinguishes DASH-L and YHU?

YHU is the name of the airport; DASH-L is the entity that manages it.

How many flying schools operate at the airport?

The training, piloting and technical units are listed on the website: https://cyhu.ca/en/our-flight-schools/

What is a touch-and-go maneuver?

A landing-controlled touchdown followed by a take-off.

Are flight school aircraft equipped with a silencer?

Yes. For several years, the vast majority (95%) have been equipped with a silencer. The exceptions are the models for which there is no certification.

What are the rules that govern their activities?

Why do planes fly over my neighbourhood?

They are flying the inbound and outbound routes from the YHU area, as prescribed. Please see pages 5 to 7 of our Soundscape Policy document on our website:

Why are there more planes at certain times?

These are busy periods for schools or business aircraft. Some flights are also strictly limited to visual flights, which can only take place during fair weather.

Why are there planes on some days and not on others?

The French text for very difficult to read and decipher. The English is an adaptation of the text and must be validated.

With the continuous increase in traffic, are there more aircraft movements (landings and take-offs)?

In fact, statistics show a decline in traffic over the last ten years. There was a clear dip during the COVID pandemic, followed by a return to the average rate of about 300-400 daily air movements.

Is there a curfew at night?

No. This term doesn’t exist in the regulations.

Why not ban all night flights?

Nighttime operations are a sensitive issue for many airports around the world and in Canada. For the hundreds of aerodromes and airports across the country, it is up to the operators and airlines to limit their operations to respect the surrounding neighbourhoods.

At YHU, night flights are exceptional and limited to special situations. YHU takes a very cautious approach by encouraging mainly daytime flights, such as hosting low-cost carriers that offer daytime flights to serve their customers.

What are the roles and responsibilities of Transport Canada and NAVCANADA (NC) with respect to air movements?

TC is the regulatory body that grants NC the management of air navigation across much of the country. Air movements and everything that happens in the skies over the YHU control zone are governed by the Canadian Aviation Regulations (CARs), and NC enforces them.

How can a complaint be submitted to DASH-L?

How are complaints submitted to DASH-L handled?

They are examined comprehensively, and if they are specific enough, corrective action can be taken to improve noise levels or the environment.

How many complaints can be submitted?

As many complaints as individuals wish to submit.

Are complaints submitted to DASH-L followed up?

As far as possible, yes. If they’re specific enough to take corrective action or improve noise levels or the environment, certainly. 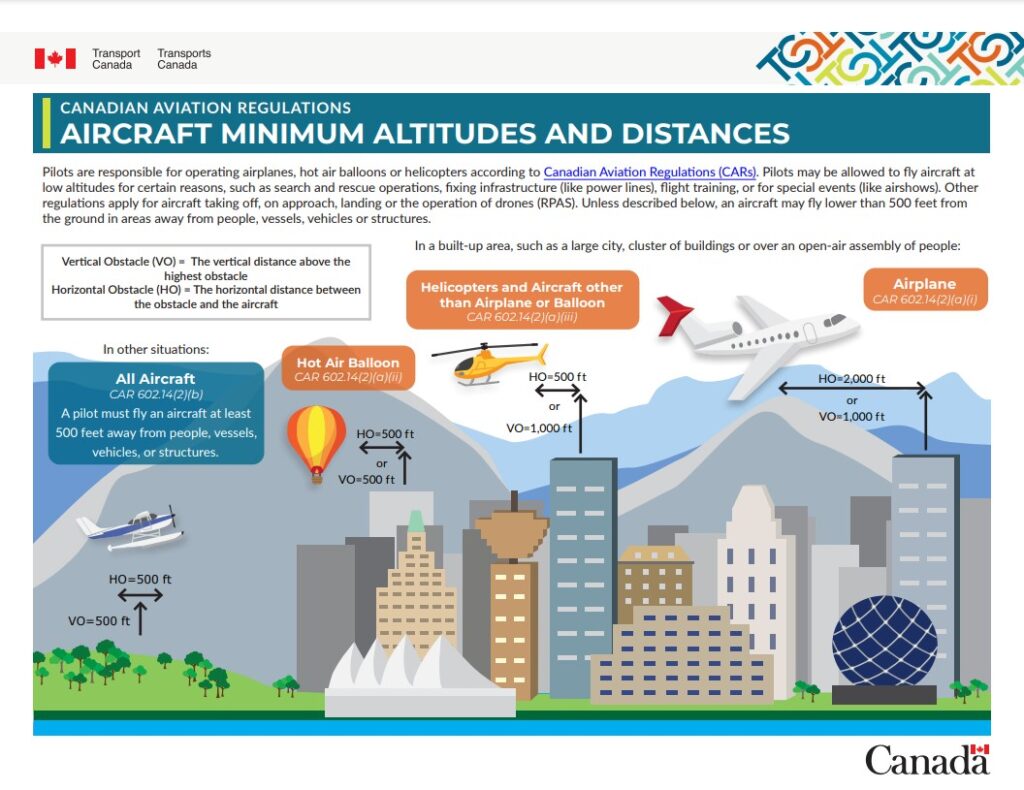